Chesterfield & Driving Back To Warsaw

Ahhh, it's been a good day. The Christopher Jensen's left early this morning for the All Star Fan Fest in St. Louis, so after seeing them off we slowly got ready to leave. Our initial plan was to be up here from Monday to Wednesday, however the car hunt / buying the car (largely buying the car) delayed our departure until today. It's somewhat surprising that we've been here for 5 days. It's been really nice up here, but after the car hunting, and buying yesterday, we're ready for some downtime back in Warsaw.

The plan for today has been to get the screws for the rear license plate on the Vibe fixed, then check out where Katie used to live in St. Louis, and then head back to Warsaw. There had been some suggestion that we should just have the dealership mail the correct screws to us. But since I had wanted to go to the old house anyway, and also just wanted the problem fixed, we decided to drive in anyway. A good thing, since the thread for the screws were stuffed, so new screws wouldn't have done us any good anyway. All in all it took us probably about half an hour to get that sorted out. I was definitely happy that we got it fixed now, rather than having to deal with it later.

After a smoke, and walking in to wait inside the dealership, Follow You Down was on over the PA/radio. Rock! Which prompted me to want some sort of iPod hookup for the drive home. We'd looked yesterday after picking up the car, and found no cheap options. The cheapest FM transmitter was $48, and because we only have CD, the cheap ($9) cassette option was out of the question. So I pretty much resided to getting a $48 FM transmitter as a temporary solution, despite that neither of us wanted to spend $48 on a temporary solution. With a trip to Walmart, we actually found a FM transmitter kit for $24, including a wall iPod charger - which even if we deck the car out with an AUX jack, I'll still get use out of. Sweet - just what we were looking for - a temporary solution that didn't cost too much.

From there we decided to have Fuddruckers for lunch, which began the finding Fuddruckers in St. Louis expedition. The first two that Buller sent us to no longer existed. Katie was ready to give up, but I suggested trying the third option, which was successful (despite the fact that we'd driven all over outer St. Louis in the hunt!) Absolutely worth it though. While the two times I've eaten at Fuddruckers were good, the didn't fully live up to my previous experiences. Today however did. Woo! 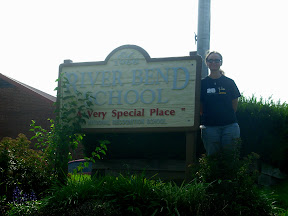 After lunch we drove out to Chesterfield and drove by Katie's old house and neighborhood and then down to here first primary school, which was a lot of fun. It's been really cool to get to not only see parts of her life in West Des Moines (which I'd seen in 1999 also), but also here it St. Louis.

From there, we drove back to Warsaw. The iPod FM transmitter worked well, and proved to be a good purchase. It's not perfect, but for $24 it definitely does the job, and it's been great having tunes for the drive. It's also really nice that our car has two power sources, since the transmitter requires one, and on was already occupied by Buller. The drive was also good for assessing our purchase of the car. Yesterday, driving it, there was some concerns about whether it drove as well as when we were test driving it (obviously a case of being really sensitive to things after you've spent $8k), but today I'd totally forgotten about any concerns. 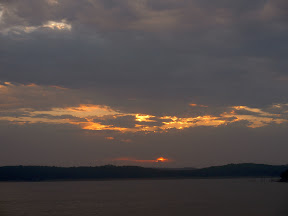 On the way back there was a really great sunset (much like when we drove back from our last road trip). This looked particularly awesome while driving over the lake. I've seen quite a few good views out over the lake, but not been in the position to take any photos. The upside tonight was that the bridge rehab (it has a drug habit to kick

) is underway and is reduced to one lane at 30mph, which helped in snapping some good shots of the sunset over the lake.
Post Comment