I think it's pretty safe to say that I've had a fair decent and patriotic first 4th of July. It started, well, for me, by adorning the overly patriotic red, white and blue shirt the Jensen's had got for me at the Bass Pro Shop, much to everyone's amusement, including my own. 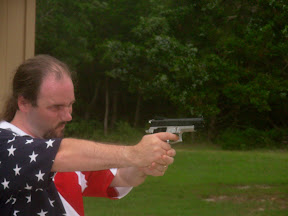 The morning started with a $3.50 breakfast, followed by watching Megan and Andrew fish at the Truman Lake fish hatchery. From there, there was a little tour of the bustling metropolis which is Warsaw Missouri for Jamie (Brad's girlfriend) before heading back to the house for all sorts of festivities. Showing everyone the video we took in Australia, playing Guitar Hero, and then after a while, getting the demonstration of what a freak Brad is on Guitar Hero (something that needs sto be witnessed to fully be appreciated). And then, an activity which very much felt American - shootin' guns!

So, admittedly, BB guns, but all the same, it felt very fitting to be outside, virtually draped in the American flag, firing off rounds at drink cans. Yee haw!

After an early dinner we headed down to the local ball field to get set up to watch the fireworks over the lake. We stopped along the way to pick up some booze ($9 something for a 6 pack of Coronas folks!) and of course, my shirt caught a lot of attention from the locals! 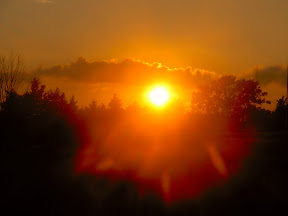 We'd hit the ball park early (about 7:30) to get a good spot for the fireworks show, scheduled for 10:45. While out there, there was a really cool sunset, and also a very decent lightning display happening in the huge clouds to the east.

While I think I've seen somewhat better choreography, I think this is the best fireworks display I've seen in terms of volume, it was quite impressive. The only complain, which Christopher seemed to also think, was it was a lot shorter in comparison to the fireworks we saw last night, lasting about 15 minutes. Which is still a lot longer than firework displays I've seen in Australia.

After the fireworks we went back to the house for...more fireworks. Brad, Jamie and Christopher went down by the pond to set off their fireworks, while Megan danced around with sparklers. Surprisingly, Andrew had fallen asleep on the way back from the lake and slept through the whole thing. There were a few hairy moments with some wayward fireworks shooting out horizontally, rather than vertically. After the first incident, I retreated up closer to the house with Megan, and not long after one looked like it was going to take Christopher out as it shot up the hill towards the house. However, by the end of the display, everyone still had all the limbs intact, and no-one was on fire.