So, the car search is over! Shelly and the kids have been such troopers throughout the whole process.

While we've been looking for several weeks, the past two days have been an intense, focused assault on car dealerships in the outer St. Louis area.

Personally I found that I was impressed with the Chevy Imparla, which Katie wasn't necessarily (like the Grand Am). Katie was taken by the Kia Rio and Malibu options, which I was not a fan of. With the exception of the Jeep Cherokee (which made it back onto the short list briefly on Tuesday after a false quote on gas mileage on the sports model), there has not been much common ground in what we like.

Surprisingly, that all changed yesterday, when we were pointed to a Pontiac Vibe which was only 1 of 2 cars under $8,000 at a dealership we were at. I'd already ixnayed the Vibe yesterday because I didn't like the look, and thought there would be blind spot issues. I must have been in a weird mood, because I agreed to take a look at it. Initially I wasn't even a fan of the color (salsa red). But hey, we were on a focused mission thanks to the 'assertive sister in-law', and with only two cars to try on the lot, we got in - and before long, thought we should take it out on the road. Pretty much minute by minute the car seemed better and better, and to fit our requirements. One of which being that we could pretend we were in a Jeep, but have above average gas mileage (and which blows the gas guzzling Jeep away). After a long, and by far the most thorough test drive we've done, we took it back, for first time strongly agreeing on a car.

We also test drove the Grand Am (up until now, one of my preferred cars) for the sake of argument. It was a great deal (nice price, surprisingly low mileage), but after the Vibe, the Grand Am didn't seem as cool.

Further looking (about 2 more dealerships) was boring, because nothing now compared to the Vibe. At the end of the day we went back and asked to take the Vibe home for the night, particularly since we hadn't driven it on the highway.

Basically, after much deliberation, we decided the Vibe was our car. Well, I think we'd decided long before that. Late last night Katie found an earlier model with fewer miles - in WARSAW - of all places! At a lot that we looked at weeks ago. By this point we'd decided to buy the one we'd test drove, and considered how we were going to break this change in plan to Shelly in the morning.

Long story short, we had the Warsaw Jensens take a look at the '06 Pontiac, and after deliberation over lunch with Chris and Shelly, and then just ourselves, we decided that we were going with the '04 Vibe we'd test drove. Much to the relief of Shelly I'm sure. It's somewhat surprising, that it had taken past midday to achieve all this, that the dealership hadn't called concerned that they weren't going to see their Vibe again! After setting up insurance, we headed towards St. Louis to make the purchase. Which was relatively smooth, but laboriously long, and something I don't necessarily want to do again for quite a while (I seem to be saying that a lot these days!

) But after hours of waiting, by about 5:30 we were new owners of the Pontiac Vibe, for better or worse. 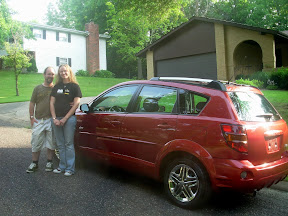 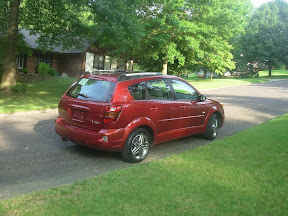 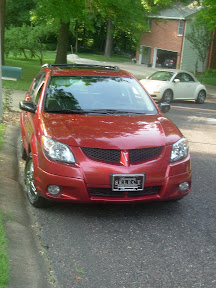 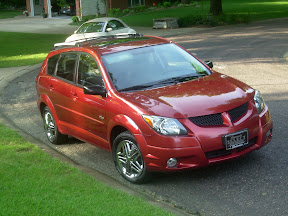 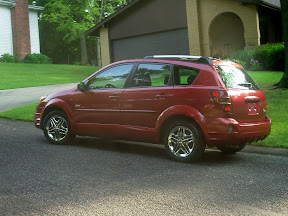