The Union Jensen's had organized for us to all to go to a Springfield Cardinals (minor league) game. And as such, were all distinguishable from the other Jensens by their Springfield Cardinals get up. So we set out in a convoy after midday towards Springfield, killing some time at the Missouri Sports Hall Of Fame and Conversation area. 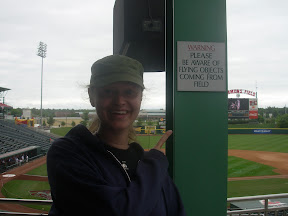 Since we had front row seats just passed the dugout, unprotected by nets, everyone, including Katie expected that she was destined to be knocked out by a wayward foul ball at some point throughout the game. So much so, that she posed by a warning signing when entering the ball park. Alas, she did not suffer any such misfortune throughout the game.

While we neglected to pick a team on the way down (due to getting wrapped up in other conversations), by about the 4th inning, we agreed that we were rooting for the home team. It made sense, given she was getting a Springfield Cardinals hat with a meal deal that she found (drink, pop corn, hot dog and a cap for $13.50 - while the hat itself retailed for $20 at the stands). Of course, the home team were victorious. 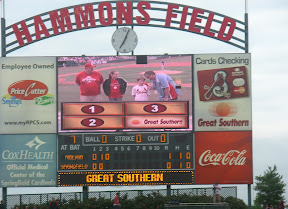 The Union Jensen's managed to get picked to play Family Feud during tge 3rd Inning. Chris knew someone who...I don't remember the details. It was a bit of excitement in any case. The kids proved triumphant for team Jensen, correctly identifying capital cities that were on the board. Christopher however didn't do as well, but they still beat the other family and walked away with $59.

After the game we said bye to Brad, Jamie and the Warsaw Jensens and followed the Union Jensens to - well, Union!